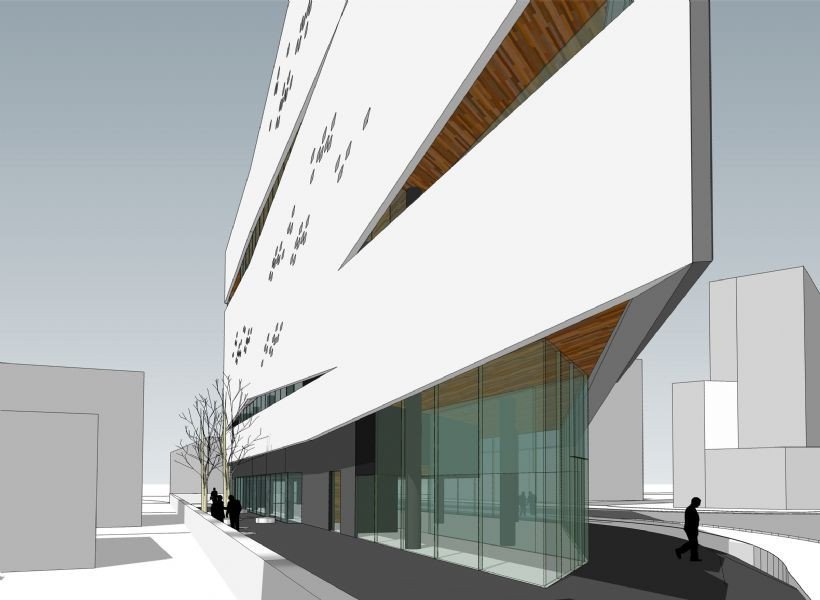 The building attempts to respond to “local” spatial parameters, but at the same time remains “hyper-local” in its resonance and aspiration. It attempts to organize a series of intentions, such as the dynamic relationship between the scale of the building and that of the urban node, the optimal adjustment of the volumes to the geometry of the plot and the interactive relationship between the building and the passer-by, through a series of calibrated morphological gestures that compile a  continuous surface into a solid, continuous form.

The building will be equipped with a technologically advanced shell, which in addition to the energy efficiency dimension that will bestow the project — it will offer shading, mechanically assisted natural ventilation, soundproofing, and controlled lighting to the office spaces, will become the main characteristic of the ‘materiality’ of the building. The triple layer shell will cast an ethereal, translucent character, which will alter the perception of the building during the different phases of the day.

The building consists of a ground floor showroom/office space of approximately 550 m2,  a 250 m2 mezzanine, three underground parking levels, and seven floors of luxury office space with areas ranging from 300 m2 to 550 m2. The organizational structure of the building has been developed for flexibility, with all levels being able to accept different arrangements, division, layouts, and uses. The office areas will be equipped with advanced electro-mechanical systems, offer two elevators with smart access controls, and will present unimpeded views.

Send a request and we will text or call you back!

Fill out the form. We will contact you and help you sell or rent your property